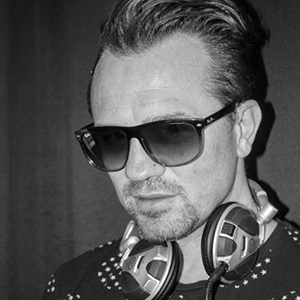 Rino(IO)DJ was born in Pescara, Italy. End of 80's he was a member of the Afro-Funk music movement in italy. Begun his career in 1989 at the Pav Club in Chieti Scalo. The first big performance was in Apocalyps disco in Sulmona (Italy). Dj @ radio Ketchup and radio Skipper in Abruzzo expanding the dance music in his region. After that he decided to work with music in different ways, DJ & Enterteiner in holyday clubs giving always the right sound for every situation, shows, fitness etc. Important experiences all around Italy, Turkey, Spain, England and Germany.

In the past he was for a short time a famous showman creating music games at the national Turkish tv. Since 2003 he went back to his original job as a dj working in Austria: Zurserl (Zurs), Le cabaret (Velden) and Take 5 (Vienna). Follows gigs in Soul Club, SCS and Donauplex Vienna where Rino and his friend Francesco Colafella organized a special tour called "The Italian Job", a great mix of music and live painting.

He played music as a special guest in Linz at Bungalow 8, Vanilly and A1, in Vienna at Partyhouse and A-Dance Club, in Salzburg at Starlight and Take 5, in Steyer at Nachtschicht,in Germany at Erding, Erfurt & Bad Neustadt Musik Parks, in Switzerland @ Musik Park a2 Basel, Aqua & Bar 0815 Zurich. In Partschach at Anna W and American Bar. Dj for the official beach party and Fate Blanche (Warthersee)and in Villach at V Club.Dj in Italy @ Titanic (Chieti). Special experiences at Yalta Club in Sophia (Bulgaria) and perfomed for the Pleasure Lounge events hosted by Audiomed together with FM4 Deejays.

Rino has been the winner of the Movida Corona dj contest Austria (2007) selected then for the world final. DJ for a apecial event called ELECTRONIC LAKE and for The World Bodypainting Festival @ Denon Hall supported by FM FORCE and MINISTRY OF SOUND.

2012/13 Rino is playng a Dance after ski at Basecamp, St Anton Am Arlberg - Austria.

2011 Rino(io)Dj is a member of Ministry of Sound Dj Pool.

2012 Rino mixed togheter with one of the best Austrian Producer, Shanti Roots a Remix of Fii single, I Still Love You (Rithym & Poetry). Fii most famous Austrian Beatbox.

2016 March Came Out On Jango Music a Very Special Track Called The Champagne Room, feat. Singer DJ & Friend....Bogo, 2 Versions...Original and Club, On Beatport N.2 Best release Rnb & Funk and N.27 Best House Release !! For Jango Music Came Out other 2 Projects, Play By Inches & Jericho, Booth On The Traxsource Charts. The Last One is A Song By Eddie Friel and The Work was made Togheter With Shanti Roots & Black Legend.

On November 2016 Come out On Jango Music a New Single With Friend & Producer DJ LuZa, "Deep Encore" a Tribute To Nelson Mandela. Greetings to all the deejays and to all the music lovers!!!